In case you missed it, you can watch the entire livestream with Sergey Sholom, GameCredits CEO and Aladin Ben Managing Director of GCesports talking about exciting updates related to the GameCredits store, eSports, and MobileGo development. Finally our teams projects and ambitions are becoming clear. Don’t miss the chance to find out more.

“We no longer talk about projects we’re working on. We now talk about the entire ecosystem we’re building with Gamecredits and MobileGO and how it will change this world! The GAME is on!…” -Sergey Sholom, Gamecredits CEO.

We are excited to announce that GameCredits and MobileGo eSports will soon arrive on PC and Mobile platforms. Following the release of our mobile store we plan to open the GCesports application.

We are proud to say we are developing a solution using both GameCredits and MobileGo that has a massive effect on the entire gaming industry.

“It feels fantastic to be on the cutting edge of technology that brings benefits to both gamers and game developers. We’re all gamers after all!” -Aladin Ben, MD GCesports.

Below are two previews of the GCesports app. 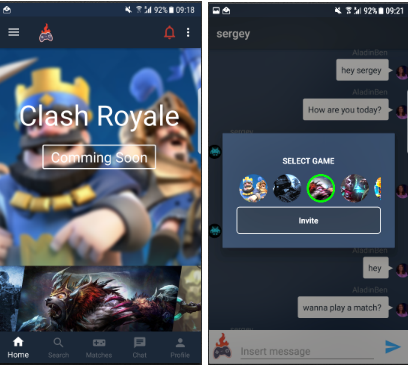 The GameCredits team is growing fast and already exceed 150 industry professionals. The team was working hard to secure partnerships with eSports companies and tournaments. So we are starting our amazing trip! We are excited to announce that GameCredits is one of the official partners of two separate gaming tournaments hosted in Sofia Bulgaria. The tournaments are ESL Southeast Europe Championship and ESL Play Zone which will be the main attractions of the larger Onfest event. Some notable partners alongside GameCredits are Logitech and Acer.

The Onfest event features cosplay, street art displays, live music, and of course the gaming tournaments. The event spans between June 24th and June 25th and will be covered by dozens of media outlets. Previous Onfest events have seen tens of thousands of attendants, and 2017 is projected to the biggest year yet. 5,000 Euro cash prizes will be awarded to the winning CSGO and League of Legends teams at the Southeast Championship event.

ESL Play is the largest eSports platform and GameCredits looks forward to being involved in the rapidly growing esports community. Going forward we will announce other events and partnership opportunities we take part in. Definitely GAME is on!